For us at CatSynth, no trip back to New York is complete without a visit to the Museum of Modern Art (MoMA), and this time it was an exceptionally rich one, with interesting exhibitions on every floor even amidst the museum’s massive renovation project.  We begin with a look at an exhibition of prints by Louise Bourgeois that focused on her print-making work.  Although primarily known for her sculptures, Bourgeois produced a large body of printed works on paper, textiles and other materials, especially at the beginning and end of her career.  But the themes and characteristic elements remain similar regardless of medium, and the show placed the printed works in the context of her sculpture.  For example, the main atrium of the museum was dominated by one of her large iconic spider sculptures, with late-career prints surrounding it on the walls. 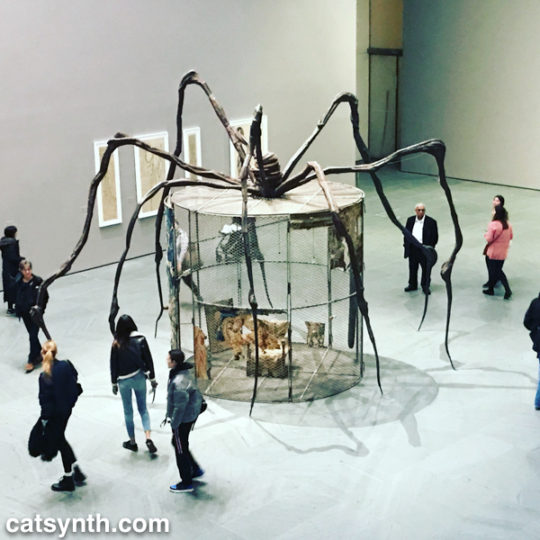 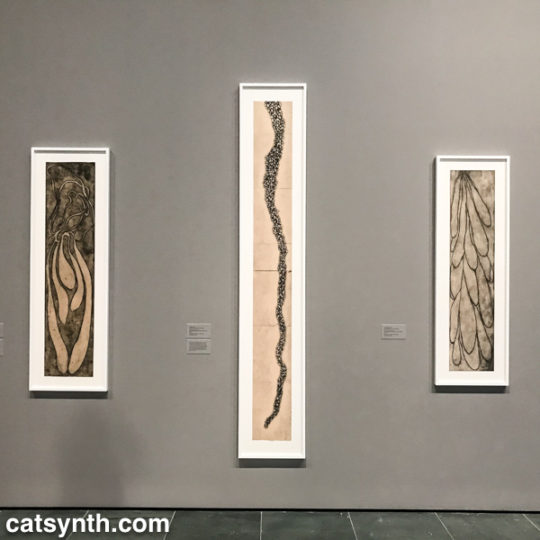 The prints in the atrium featured curved, organic forms, in keeping with the same natural focus in the spider and many of her other sculptures.  We can see this synergy between print and sculpture throughout the exhibition, with early prints and drawings informing her sculptures of the 1950s and 1960s, which combined geometric and architectural elements with organic shapes and textures. 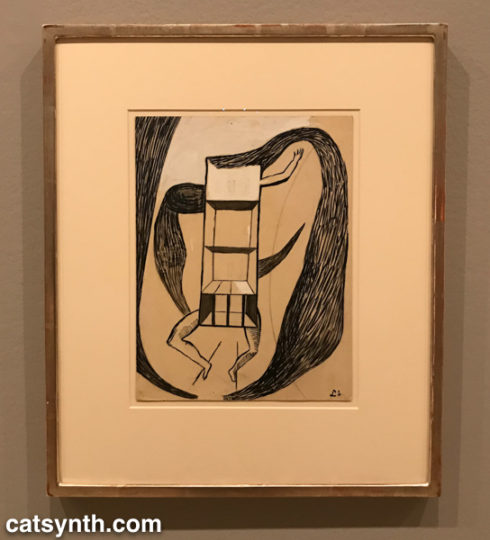 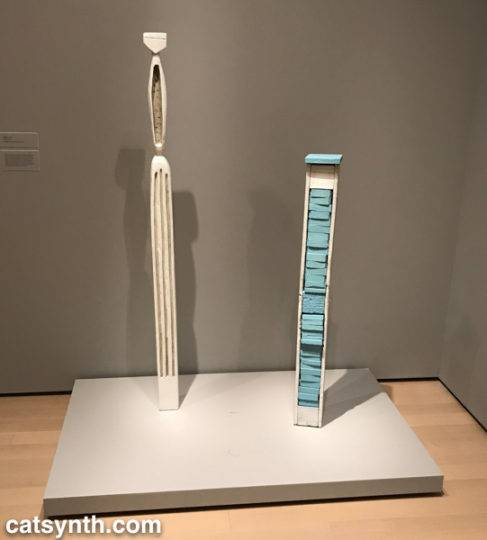 The vertical nature of the forms enhances the sense of embodiment in the sculptures, while drawings like Femme Maison (shown above) make the connection literal.  Bourgeois revisited these same themes in many of her later prints, perhaps even drawing upon the earlier sculptures themselves for inspiration. 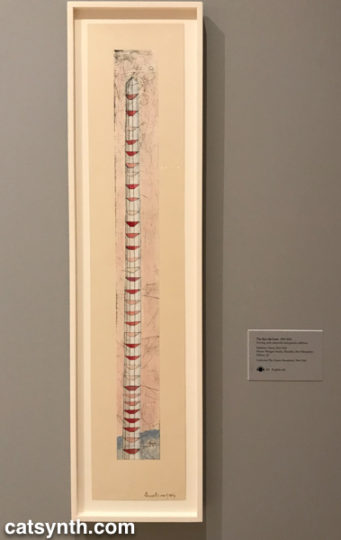 In addition to the intersection of architectural and biological forms, Bourgeois’ work often explores themes of womanhood, fertility, and sexuality. Indeed, the 1947 Femme Maison combines all three themes.  On particularly poignant series from the 1990s, late in her life, revisits motherhood embodied in Sainte Sébastienne (presumably a gender switch of the early Christian martyr Saint Sebastien).  Childbirth and pain come together in the first more literal series of images, but there is a softer element to the second series, which includes this image combining the maternal figure with a cat. 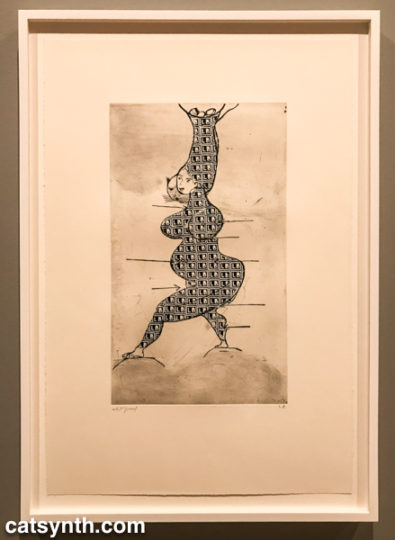 Sexuality comes through abstractly in many pieces, but quite literally in some late-career drawings which have a playful, comic-like quality, as in this page from her illustrated book The Laws of Nature. 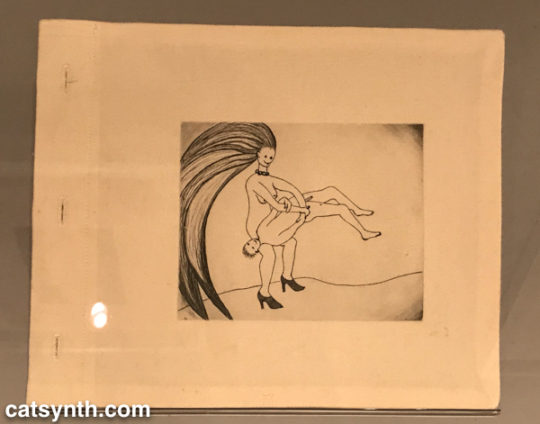 [Louise Bourgeois and Paulo Herkenhoff.  Untitled, plate 2 of 5, state X of X, from the illustrated book, The Laws of Nature (2006)]

Bourgeois celebrated both the female and male while turning some of traditional roles and stereotypes on their head.  In the above image, it is the woman who appears to be in control in the sexual moment, with the male figure more passive.  Another particularly amusing riff on gender stereotypes is her sculpture Arch of Hysteria in which a suspended male torso is used to represent “hysteria”. 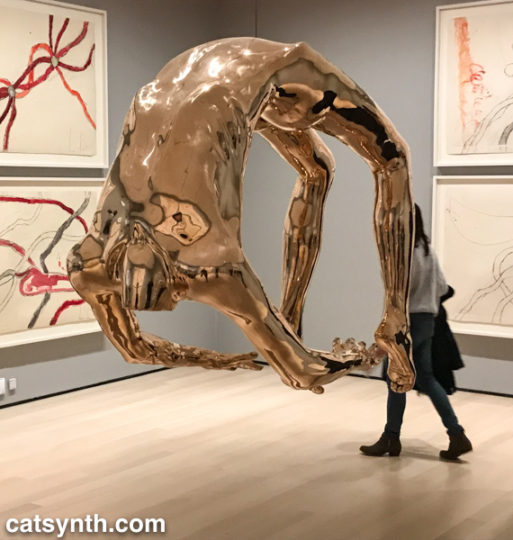 Having been on the receiving end of “why are you being so emotional?” comments in the workplace, I rather enjoyed seeing this stereotype turned around.

We conclude with one last piece from the Lullaby series in which a simple red organic form is printed on sheet-music paper. 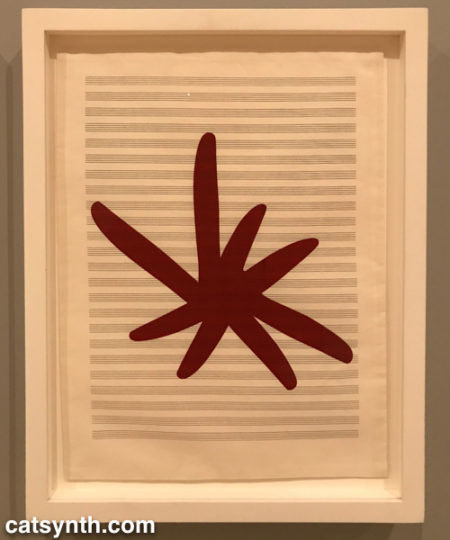 Like the drawings from The Laws of Nature, these were done towards the end of the career.  I thought it was interesting that she chose music paper as the foundation for this series.  And for us at CatSynth, it allows us to circle back to music, which permeates our experience of art.

Louise Bourgeois: An Unfolding Portrait will be on display at the Museum of Modern Art in New York through January 28, 2018.  You can find out more information here.